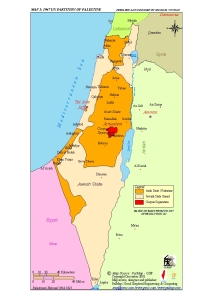 In the early 1950’s, The Ramallah people of San Francisco met in the back rooms of grocery stores. As their attendance grew larger, they started to hold their meetings in their homes. A few months later a group of Ramallah college students, along with other fellow Arabs, met and formed the Arab-American Club, which lasted about two years.

In 1952, when the American Federation was established, the elders of the community convinced these fellow students to dissolve their original club and start functioning as a Ramallah entity. They agreed, elected officers and started to hold meetings regularly at the members’ homes. As they grew, their meetings were held at the Orthodox Church on Green St. They started a newsletter that they mailed out to approximately 100 members. (We were told that stamps, at the time, cost about three cents).

In 1955, as the community grew even larger they decided they needed to find a hall to hold their meetings. Fresh out of college, these students could not afford a hall. But somehow, they managed to put together $2,000. At the next meeting, a suggestion was made to establish a fund for the purpose of purchasing a suitable building. Of course, there was a heated discussion but in the end they all agreed. By 1959, they collected around $25,000 and started looking for a place. They finally found and bought the present hall at 1951 Ocean Ave. for $48,000. In the early 60’s the hall was remodeled and became Ramallah Club.

Since then, it has seen it’s share of many joyous occasions, such as engagement parties, weddings, baptisms, showers, graduations and social gatherings for our community. Our monthly meetings are held on the first Tuesday of every month. It has been remodeled twice and operates under the name Ramallah Club of San Francisco.